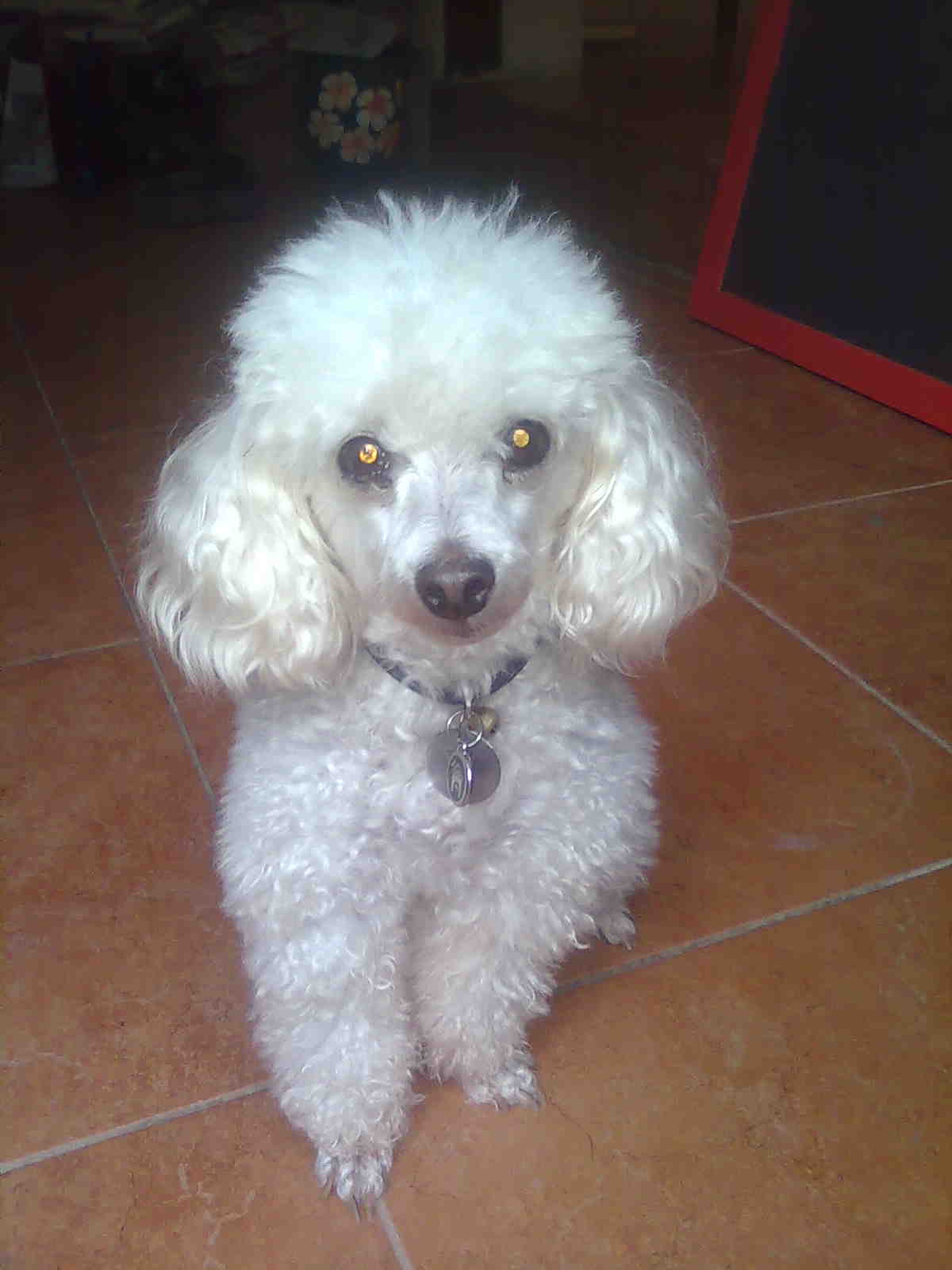 Rina is writing her memoir, Two Poofs and a Poodle. She’s not the fastest writer in the world, but she’s found her voice. Here is her first chapter.

Nobody told me, but I’m not stupid. I watched them taking the suitcases from the top shelf, packing everything, leaving drawers and cupboards empty. I’d listened to them fare-welling staff and chatting about Christmas in Canberra. Instinct warned me, my life would change – yet again.

The car arrived at sundown as day turned to night. They stacked their cases in the boot, but my pink bag and matching cloth kennel sat on the kids’ laps in the back seat. Their mum, Christine cuddled me in the front, pretending all was normal. I knew it wasn’t and my mood matched the darkening day.
“Bayu’s Kitchen first, next the airport,” Christine said. Her words sounded musical, and the twins sang along, “And home in Australia tomorrow.” They trilled with excitement, but not me; I didn’t foresee a plane flight in my future.

At Bayu’s Kitchen we piled out of the car, the kids still holding my possessions. My trip was over; I was getting off here.
“Steve, Bayu, we’re here,” Christine yelled, bouncing up the steps to the cafe. It was familiar to me; we’d eaten here twice a week for the last six months. The twins loved their hotdogs and beefburgers. On each visit the owners fed me chicken and showered me with hugs and cuddles. Now, they came running from the kitchen, beaming smiles as if they were expecting me.
“Here she is,” the mother said passing me to Steve, “Got to dash or we’ll be late,” and the three of them descended the steps, jumped into the car and drove away.
“We’ll look after her,” Steve called to the departing car.
I stared as my third set of owners left, enveloped in my own thoughts. Three homes in six years. I’ve become a hand-me-down. I’m too good for this.

Steve passed me to Bayu and picked up my belongings.
“Dia cantik sekali,” Bayu said, speaking my second language. I liked him telling me I was very beautiful. He kissed me on the head and held me tight. I snuggled against him, sniffing in the smells of food on his apron, relaxing a little.
“Let’s settle her in,” Steve said and we followed him next door to their house and into the bedroom. I’d never seen it before and it looked cosy, with a king sized bed for the three of us. I watched him place my little kennel on the floor, my bag on a shelf, took out my water bowl, filled it in the bathroom and sat it on the floor. Bayu stared too and asked, “What are you doing? Shouldn’t those things go outside?”
What’s he saying? I thought. Outside, not me, I’m an inside dog, meant to be spoiled and adored. But I didn’t bark or complain, instead nuzzled into Bayu’s arms, showing I needed him.
Steve collapsed onto the bed, patted Bayu’s side and said, “Come here, play with her, help her settle in.”
I liked this older, bigger, white man. He was on my side. Bayu, the younger, Indonesian, handsome one, needed convincing, so I concentrated on him to win him over.

And then we were on the bed, Bayu on the left, Steve on the right and me in the middle. I looked at Steve and his smiling eyes, but snuggled up against Bayu, rolling over onto my back so he could rub my belly.
“She’s gorgeous” he said, gazing at me. My eyes glazed over with ecstasy as he massaged my belly, tweaked my little nipples, rubbed my neck and back and finally stroked behind my ears. He made a girl feel special, but then he spoiled it by saying, “When will we buy the cage?”
I tensed, waiting for Steve’s response.
“Cage, what cage?” Steve asked. He didn’t understand what Bayu was saying, but I did, only too well. I’d been caged before and hoped those days were over, but not if the prince got his way.
“You’ve seen them, a metal cage for her to live in, where she can sleep. It can go out in your office.”
Steve and I thought for a minute and then he replied, “Tomorrow, the shops are shut now. We’ll buy it tomorrow. She can sleep in her kennel tonight, in our room, so she’s not scared. It’s her first night. Is that alright with you?”
He’d stopped massaging as he thought, so I nudged him, and licked his hand, reminding him to get on with it.
“She likes me,” he said and resumed the gentle rubbing. “Okay, tomorrow. We’ll buy it tomorrow.”

Bayu turned on the TV and we settled to watch, ‘Indonesian Idol’. I lay beside him and the gentle massaging continued; each stroke, a step in his conversion. Steve organised dinner, and we picnicked on grilled chicken, rice and vegetables sitting on our bed.
As Steve cleared away our plates, he moved a pillow from his stack of three to the gap between him and Bayu. He placed a hand on it as he smiled, and I understood it was mine, between my two new owners.

Steve stood and walked to the end of the bed. “Rina,” he said, and I ran to him. Bayu looked startled and asked, “What are you doing?”
“Taking her for a pee before you both fall asleep.”
“Ah,” he said, “remember to wash her.”
He carried me out to the front of his studio and talked while I sniffed around finding just the right spot to wee.
“Bayu’s wonderful, and he loves you in his own way. He’s Muslim and dogs are new to him. Love him and he will love you back and we’ll settle in just fine, one big happy family.” I understood.
On the way back to the bedroom, we stopped at the laundry tubs and he washed and dried my rear.
“All done,” he said as he placed me into Bayu’s outstretched hands. “I need to answer a few emails. I’ll be back in a minute.”

Bayu was sleeping when Steve returned, and I was resting in the crook of his arm. I opened my eyes when I heard Steve, saw him nod and crawled commando-style, up onto the pillow he’d set out for me. I listened to Steve in the bathroom, watched him come to bed and slip between the sheets, turn off the bedside light, and say, “Good night Bayu. Good night Rina. I love you both.”
We slept, each with our own pillow; Steve on the left, me in the middle and Bayu on the right.
In the dark hands came from both directions, caressing, touching and stroking. I knew I was safe here.

I woke first, busting for a pee, but dozed there waiting for them. Steve and Bayu awoke minutes later, and I sensed their eyes staring, but I didn’t move.
“Has she been here all night?” Bayu asked.
“Suppose so.”
I opened my eyes, yawned and looked from one to the other.
“Come,” Steve said as he stood. “Let’s pee.”
I didn’t need to be asked twice and ran to his waiting arms.
When we returned, I dashed to Bayu and nestled next to him.
“We’ll buy that cage today. What’s a good time for you?” Steve asked Bayu.
“Don’t be silly,” he said, laughing and smiling. “This works just fine. She can sleep with us.”
I was happy and thought, If I’m a hand-me-down, I’m definitely a perfect fit for these guys. This was my forth home, and hopefully my last.
“Can we keep her?” Bayu asked.
“Let’s see. I hope so.” Steve said.
I hope so too, I thought.

Rina and I would love to hear your feedback.